In 1941, Isaac Asimov coined the term “Robotics,” giving name to a future filled with intelligent machines. Like many of you, I’m a believer in that future and the promise of AI to unlock the next great evolutionary step in human potential.

As tantalizingly close as that future might feel, the harsh reality is this: for AI applications of consequence, the first 90% of the development challenge is easy, the last 10% is excruciatingly hard. This “last mile” gap — captured in edge cases, false-positives, low-confidence predictions — is the most expensive, pervasive barrier to AI progress. It drains R&D resources, degrades customer confidence, and ultimately prevents the products ready to change the world, from ever getting to market. And we are decades away from that not being the case.

If you disagree — stop here, the rest of this post won’t make sense. If you believe we need a new strategy for overcoming the “AI Chasm,” read on and let me share a vision for how we can solve it together.

The problem is cognition (or lack thereof)

At the forefront of modern AI is machine learning, which Gary Marcus in Rebooting AI calls “the art of making educated guesses based on data.” That’s how the smartest AI systems today function. But what they’re critically missing is a fundamental understanding of how the world works and the common sense to adapt when it looks different from how they were trained. In a world that is infinitely varied and constantly changing, that’s a massive problem.

Every ML engineer who’s spent a decade trying to get a car to drive itself, every entrepreneur who’s failed to scale a robotics product that couldn’t quite perform, every VC who’s lost money on an AI investment, has felt this deep in their bones. And in that feeling is the realization that this is not a problem another $100 million will make go away. It’s baked into how we build and train models, and it’s preventing us from realizing value today.

It’s no surprise that while 92% of the Fortune 1000 is actively investing in AI, only 15% have ever successfully deployed any AI capabilities into widespread production [1]. Every company — startup or enterprise — is facing the same challenge. AI is hard to perfect.

And that has consequences. An autonomous construction vehicle that can’t recognize dusty obstacles, can’t launch. A bin picking robot that gets confused by misshapen boxes, can’t scale. A structural inspection CV model that can’t tell the difference between a crack and seam, can’t be trusted. Rare as these moments may be, they’re enough to degrade confidence in the entire system, blocking products from commercialization, and draining immense R&D resources along the way.

Real-time cognition, in an API

Our contrarian view is that AI is better with humans. We know because we experienced it while building the self-driving car company Zoox, where our thoughtful use of real-time human cognition enabled us to outperform. In SparkAI, we’ve taken this earned secret and generalized it for the wider market of automation applications.

As we’ve found, the things AI systems are notoriously bad at, are the things humans are exceptionally good at. We humans derive meaning from context, adapt to new situations through pattern recognition, and we do it better than any(thing) else in the universe. The question is then, how through technology can we make human cognition available in discrete units, with high-integrity, and in near-real time, anywhere it’s needed in a production AI workflow.

That’s the magic of what we do at SparkAI. We resolve edge cases and other AI exceptions live in production. The outcome is a seismic shift for automation program trajectories, already enabling our Global 2000 and advanced startup customers to do more than ever before.

The concept of engaging humans in the AI decision loop is not new, but enabling it in the critical path at scale and in near real-time is nowhere close to trivial. For companies focused on building the best robots and AI models in their fields, it’s also entirely non-core. We make it instantly accessible and radically cost-effective by delivering technology and operations in a simple-to-deploy API/SDK.

When called, our role is not to take over control (read more on the challenges with remote piloting, a.k.a. TeleOperations) — AI systems are intelligent enough. What we deliver are the missing contextual cues that those systems sometimes need as input to make confident real-world decisions in the face of unexpected challenges.

From autonomous agricultural robots to computer vision-based insurance inspections, SparkAI is opening the floodgates at some of the world’s largest enterprises and fastest-growing startups to launch and scale revolutionary automation products faster than ever.

This is just the beginning

Once companies have already invested millions of dollars and years in R&D, we ask the question — what then? How do you take your model and bring it to market right now, today? How do you open new revenue streams, or launch new features with the best of what you’ve built — imperfect as it may be?

While the market of powerful ML and data infrastructure tools is focused on supporting models in development, we see a widening opportunity in delivering products and services that enable AI in production, with real-time cognition as the starting point.

SparkAI is helping many of the world's largest enterprises and fastest growing startups deliver on their automation imperatives. If you’re a company seeking to push beyond the boundaries of what you can deliver today — ask, what more can you do with SparkAI? And let us show you.

SparkAI is growing fast — join us!

We believe that revolutionary automation and robotics products shouldn’t have to wait for the next AI breakthrough. Our vision is to accelerate their proliferation by changing how companies and entrepreneurs think about solving problems on the path to commercialization.

If you enjoy pushing boundaries and making real the things that people said weren’t possible, join us — and let’s show the world how. View open positions.

Dear AI Business Leaders: You’re Under Pressure, We Can Help 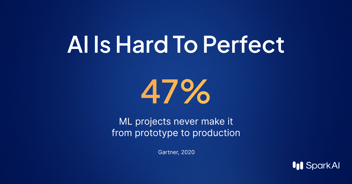 Why Do AI Projects Fail? 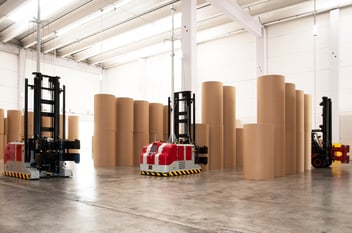 Know This Before Building an Edge Case Resolution Platform